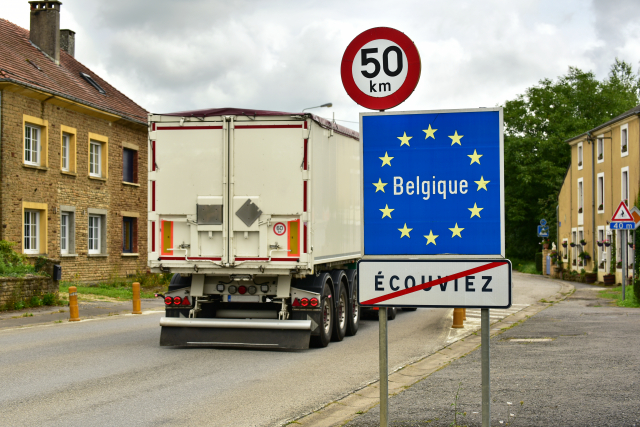 New restrictions in the EU, the rules at the Franco-Belgian border are getting tougher

The rise in Covid cases has seen several EU countries impose stricter measures on unvaccinated people – and even a lockdown in the case of parts of Austria.

The Nord department reacted by toughening the rules this weekend for unvaccinated people crossing the border from Belgium. A negative Covid test carried out within 24 hours is now necessary (compared to 72 hours previously).

We take a look at the current Covid situation in France and whether the country could impose new, similar measures on unvaccinated people.

The European Center for Disease Prevention and Control (ECDC) said the epidemic situation is of great concern in many EU countries.

Austria, the Netherlands, Germany and Norway are among the countries that have announced additional anti-Covid measures, including a lockdown for unvaccinated people in some areas.

What measures has France reintroduced?

France has imposed additional measures in the North, at the Belgian border. It comes after 50,000 new cases of Covid were reported in Belgium last week.

What measures have been imposed elsewhere in the EU?

The Netherlands has confirmed the partial lockdown for three weeks from Saturday (November 13) and is also demanding the closure of essential restaurants, bars and shops such as supermarkets at 8 p.m. Non-essential stores must close at 6:00 p.m.

Most Covid patients in intensive care units (69%) and hospitals (55%) nationwide are unvaccinated, although 72% of the population is fully vaccinated, AFP reported.

The country plans to limit access to restaurants and places of recreation to only those vaccinated or those who have recently recovered. A negative Covid test will no longer be considered sufficient.

Northern Austria has also been hit particularly hard by an increase in the number of Covid cases, with more than 10,000 confirmed every day.

The country has announced a lockdown for unvaccinated people in Upper Austria and Salzburg. He also declared last weekend a “vaccination weekend”, offering additional resources to help those who are not yet vaccinated to receive a vaccine.

The lockdown is also likely to be imposed nationally in Austria, although a date for this has yet to be set.

The country has also made vaccination compulsory for healthcare workers, and children five years and older will be able to receive the Pfizer vaccine in the capital of Vienna, from November 15.

This will be a first in the EU, as the European Medicines Agency (EMA) has not yet confirmed its approval for vaccination of under 12s.

Almost 65% of the 9.8 million people in Austria have been fully vaccinated, but this figure is lower than the EU average of 67% and considerably lower than that of Spain (79%) and France (75%).

The regions of Saxony, Thuringia and Bavaria are even more affected, with 521, 469.2 and 427 respectively.

Pressure is mounting on hospitals. Some local measures have been reimposed; from today (November 15) a negative Covid test will no longer be sufficient to access restaurants, bars, sports halls or lounges.

Now people will need proof of vaccination or a recent recovery from Covid.

Just over 67% of the German population is vaccinated.

The country is also experiencing a relative peak in Covid cases, with 500 new cases per day in a population of 5.4 million.

About 70% of the population is vaccinated.

The government has announced that it will allow local authorities to enforce the use of a health pass, and unvaccinated health workers will now have to take a test twice a week and wear masks.

Contacts of unvaccinated people aged 18 and over will need to be tested from tomorrow (November 16).

What is the current situation in France?

The majority of people hospitalized with Covid are not vaccinated, and cases in France are rising sharply. The incidence rate (cases per 100,000) is expected to exceed 100 this week.

Last week, President Emmanuel Macron announced additional measures in France such as the obligation for all over 65 to have a reminder if they want their health card to remain valid.

Read more: France Covid recall jab mandatory from December: who is it?

Masks are also compulsory for all primary school children from today (November 15).

Read more: Return of compulsory masks in all French primary schools on November 15

The government also continues to push people to get vaccinated, as Mr. Macron has called on the six million people in France who have “not received any dose” to be vaccinated “in a spirit of responsibility”.

Government spokesman Gabriel Attal said: â€œThe fifth wave will go to unvaccinated and vulnerable people who have not had boosters. Each injection takes a patient away from the hospital and brings us all closer to a calm winter.

Professor Pascal CrÃ©pey, researcher and epidemiologist at the School of Advanced Studies in Public Health, says 20 Minutes: â€œWe can expect a sharp increase in cases between now and the Christmas holidays.

â€œEspecially since in winter, we spend more time in confined spaces and we ventilate the rooms less.

It seems unlikely at the moment. This is partly explained by the fact that the health situation and the proportion of people vaccinated are different in France from many other countries.

Dr Laurent Chambaud, Director of the School of Advanced Studies in Public Health, says 20 Minutes: â€œIn our country, 75% of the adult population is fully vaccinated and 80% is partially vaccinated. In Austria, 65% of the population received both doses of the vaccine.

Minister of the Economy Bruno Le Maire yesterday (November 14) told BFMTV that the country “must absolutely avoid a new confinement”.

He called on the French to “take their responsibilities” because a new confinement would “not be good for us, our private life, our society, the morale of our children, for the economy or for the businesses which have restarted”.

Professor CrÃ©pey added: â€œPutting the burden of new measures on the unvaccinated would not be a miracle cure against the resumption of the epidemic. Of course, coercive measures against them are likely to protect them and reduce the burden of hospitalizations.

“But they could not stop the epidemic dynamic, since vaccination only protects against 50% of the transmission of the virus.”

Professor CrÃ©pey added that the restrictions imposed on the unvaccinated would probably “not be well respected” in France, and that “increasing constraints on people who refuse the vaccine would be likely to radicalize them” and “would not change the situation. ‘opinion” .

Dr Chambaud said that so far the French government has “preferred a logic of strong incentives for vaccination, and it has worked rather well”. He said changing this would not be “a coherent strategy”.

Likewise, in France, the Constitutional Court would probably also reject such measures as infringing the principle of equality.

However, France could further tighten the restrictions, in particular by requiring more barrier gestures in public places, and by recommending that people limit their social interactions.

Professor CrÃ©pey declared that “if everyone reduced our interactions by 30%, this would naturally lead to a decrease in contamination”.

Mr Le Maire also echoed calls from the president and government spokesperson and urged more people to get vaccinated.

He said, â€œEven if you don’t do it for yourself, do it for your loved ones, for all the citizens who come back to hospitals and intensive care units; do it for others.

Coronavirus: daily update on the situation in France

French hospitals at risk and in need of urgent funding, warns leading doctor

Is the Covid health pass really in force in France?