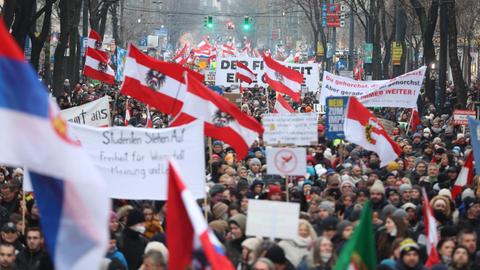 Covid-19 has infected more than 269 million people and killed more than 5.3 million worldwide. Here are some of the latest developments related to the coronavirus:

Tens of thousands protest against mandatory jabs in Austria

Tens of thousands of people demonstrated in Vienna, the Austrian capital, against mandatory Covid-19 vaccines and home containment orders for those who have not yet received the vaccines.

Police said around 44,000 people attended Saturday’s protest, the latest in a series of huge weekend protests since Austria last month became the first EU country to declare that it would make vaccinations compulsory.

Partial containment since last month ends Sunday for those vaccinated, but those who have not received the required doses will have to stay at home.

“I am not a neo-Nazi or a hooligan,” said another, “I am fighting for freedom and against the vaccine.”

Vaccination is compulsory from February for all residents over 14 years of age, except for exemption for health reasons.

The UK government may need to introduce more stringent restrictions to slow the growth of the omicron variant and prevent a further rise in hospitalizations and deaths from Covid-19, UK scientists have said.

British health officials say the omicron spreads much faster than the delta strain and is likely to replace it and become the dominant variant in Britain within days.

The UK recorded 58,194 coronavirus cases on Friday, the highest number since January, although the share of the omicron variant is unclear.

French authorities want to speed up vaccinations against the coronavirus before Christmas as infections increase and more and more people with Covid-19 are seeing a doctor.

“People can celebrate Christmas normally, but we have to respect the rules (…) and get vaccinated,” French Prime Minister Jean Castex told public radio France Blue during an interview in Alsace on Friday evening.

France recorded a daily average of more than 44,000 new cases over the past week, a 36% increase from the previous week, according to the latest government figures. Weekly hospitalizations of people with Covid-19 increased by 1,120, an increase of 41%.

The government closed nightclubs on Monday until January 6 and stepped up social distancing measures in closed spaces and outdoors. Castex said the government is not considering another lockdown that would limit or ban public events and social gatherings.

Italy has reported 96 coronavirus-related deaths in the past 24 hours, up from 118 the day before, the health ministry said, while the daily number of new infections rose to 21,042.

New cases had jumped by nearly two-thirds on Friday to 20,497.

With 96 victims in the last 24 hours, Italy has recorded 134,765 deaths linked to Covid-19 since the onset of its epidemic in February of last year, the second highest death toll in Europe after the Great -Brittany and the ninth in the world.

The country has reported 5.2 million cases to date.

Over 121.6 million vaccines administered in Turkey to date

Turkey has administered more than 121.6 million doses of Covid-19 vaccine since it launched a vaccination campaign in January, official figures show.

More than 56.5 million people have received a first dose of the vaccine, while nearly 50.9 million have been fully vaccinated, the health ministry said.

Meanwhile, the ministry has confirmed 19,255 new coronavirus infections, 191 related deaths and 23,180 recoveries in the past day.

Taiwan has confirmed its first cases of the Omicron variant of the coronavirus, found in three people arriving from abroad.

The island’s Central Epidemic Command Center said the infections were found in travelers arriving from Britain, the South African nation of Eswatini and the United States.

Like all entrants, they have been tested on arrival and have already been subjected to two weeks of quarantine.

The autonomous island has a strict two-week quarantine on arrival and has closed its borders to everyone except residents and citizens, with a few exceptions.

The Indian Ocean island nation of Mauritius has recorded its first two infections of the Covid-19 Omicron variant, both linked to people returning from South Africa, with a dozen additional contact cases to fear.

Health Minister Kailesh Jagutpal told a press conference on Friday that the couple were asymptomatic and had tested negative the day before.

“They have already returned home,” he said.

He added that the search for contracts for the two people had been carried out, revealing 12 positive cases with a missing S gene – a telltale sign of Omicron.

Health officials were currently analyzing the samples to determine if they were indeed Omicron.

The World Bank has approved an additional loan of $ 150 million to help Ukraine speed up Covid-19 vaccinations, the Ukrainian office of the international lender has said.

The Ukrainian government will spend $ 120 million on 16.5 million doses of the vaccine and the rest will be used for IT, communications and public awareness, capacity building, cold chain and management equipment waste, the World Bank said.

The new funds are in addition to $ 155 million provided this year for two projects to support Ukrainian healthcare during the pandemic.

The two clubs could not find a suitable date to reschedule Thursday’s game and “as a result, the game can no longer be played”, explained the European football governing body.

The UEFA disciplinary wing will determine the outcome of the canceled match.

The decision will please the winners of Groupe G Rennes.

The Mexican Ministry of Health has reported 199 more deaths from Covid-19 in the country, bringing the official toll since the start of the pandemic to 296,385.
The Department of Health has previously said the actual number is likely significantly higher.

The seven-day average of Covid-19 cases in the United States has increased by 37% and the average number of deaths per day has increased by 28%, said the director of the Centers for Disease Control and Prevention, Rochelle Walensky.

Brazil has recorded 7,765 new cases of the novel coronavirus reported in the past 24 hours and 234 deaths from Covid-19, the health ministry said.

The South American country has now recorded 22,184,824 cases since the start of the pandemic, while the official death toll has risen to 616,691, according to ministry data, in the world’s second deadliest outbreak in outside the United States.

France reports 2,498 people in intensive care units for Covid-19. The number has increased by 37 in the past 24 hours.

The country has also recorded 141 additional coronavirus-related deaths, bringing the death toll to 93,338 since the start of the pandemic.

The occupancy rate of intensive care units in the country is increasing as the number of cases increases while the fully immunized ratio of more than 67 million people is at 71 percent.

The Swiss Medicines Agency Swissmedic has approved the vaccination of children aged 5 to 11 with the Comirnaty vaccine from Pfizer-Biontech.

“The results of clinical trials show that the vaccine is safe and effective in this age group,” he said in a statement.

The Comirnaty vaccine is given in two doses of ten micrograms three weeks apart.

An ongoing clinical trial on more than 1,500 people “shows that the Covid-19 vaccine offers almost complete protection against serious diseases caused by the SARS-CoV-2 virus in 5 to 11 year olds,” he said. declared.